Albavet Fife goes back to school

Teams from Albavet Dunfermline visited 2 local primary schools to take part in their career days on the 9th and 10th of May. 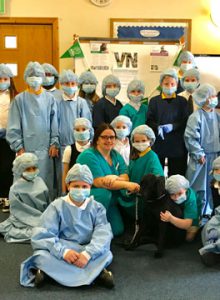 Each team described to the pupils all the different roles that are available as careers within the veterinary practice. The pupils had the opportunity to brush up on their bandaging skills – bandaging each other and a giant toy sheep!  They had the chance to dress up as one of the team and see what it was like to dress up as an operating vet – in full operating gown, mask and hat, many of the students couldn’t believe how hot they became and commented on how hard it would be to be working in an operating theatre all day. There were also various containers filled with items removed from the outside or inside of an animal and the students had to guess what they were. The most popular guess for the mammary growth was a brain and the pupils thought the decayed teeth were particularly gruesome and were not fans of the roundworms.

The stars of both days were the special guests we took along with us. At Dalgety Bay PS we took Simon the 20 year old tortoise belonging to Melanie (insurance administrator) and the next day Susie, the gorgeous black Labrador belonging to Dalgety Bay receptionist, Jackie, came to Donnibristle PS.

We would like to thank the staff and pupils of both primary schools for inviting us to take part in their career days and for making us feel so welcome. We hope we have inspired some future stars of the veterinary profession.

We are using cookies to give you the best experience on our website. Find out more about which cookies we are using or switch them off in settings.

Our website uses cookies to distinguish you from other users of our website. This enables us to provide you with a good experience when you browse our website and also allows us to improve our site.

You can find out more on our cookie page at any time.

If you disable this cookie, we will not be able to save your preferences. This means that every time you visit this website you will need to enable or disable cookies again.

This website uses Google Analytics to collect anonymous information such as the number of visitors to the site, and the most popular pages. Keeping this cookie enabled helps us to improve our website.

Please enable Strictly Necessary Cookies first so that we can save your preferences!